To my great dismay, I reconnected to technology on Sunday night after I concluded celebrating Rosh Hashana to learn the profoundly sad news of Justice Ruth Bader Ginsburg’s passing. Ginsburg was a heroine who fought against gender discrimination, a champion of women’s rights, a powerful civil rights lawyer, and an empathetic figure who served on the United States Supreme Court for twenty seven years. Thousands have gathered to mourn her passing and to pay homage to her contributions to the judicial system and the legacy she left behind.

Ginsburg once said, “My mother told me to be a lady. And for her, that meant be your own person, be independent.” Ginsburg was a shining feminist icon who lived every day according to that credo. Even in the face of adversity, Ginsburg’s perseverance and compassion spoke volumes about her strength and character. She graduated top of her class in 1954 at Cornell University and enrolled at Harvard Law, where she tackled challenges of motherhood and a male-dominated school, being one of the seven women in a 500 person class. She served as the first female member of the Harvard Law Review, and after transferring to Columbia Law School for her last year, she graduated first in her class in 1959. In the 1960s, Ginsburg taught at Rutgers University Law School, a position she held for 9 years before accepting an offer to teach at Columbia University where she became the first female professor to earn tenure.

Prior to her 1993 appointment to the Supreme Court by President Bill Clinton, Ginsburg had already left an indelible mark on society by advocating for gender equality and civil rights. As the director of the Women’s Rights Project at American Civil Liberties Union (ACLU), she fought against gender discrimination and argued six landmark cases before the Supreme Court. She successfully challenged a system that offered restricted opportunities for individuals based on prejudice gender roles of the 1970s. As a justice, Ginsburg wrote the majority opinion in United States v. Virginia in 1996, which granted qualified women admission to Virginia Military Institute. In 2007, she dissented against Ledbetter v. Goodyear Tire & Rubber Co., and she worked with President Obama to pass the Lilly Ledbetter Fair Pay Act, which promoted worker protection against pay discrimination.

Ginsberg’s advocacy over the years showed her steady and calculated style, where she tackled gender discrimination and violations of civil rights one battle at a time. Her resilience and determination have positively impacted social justice, and she improved millions of lives by dismantling countless barriers.

Nina Totenberg, NPR’s award-winning legal affairs correspondent, tweeted the following on Saturday, “A Jewish teaching says those who die just before the Jewish New Year are the ones God has held back until the last moment because they were the most needed and were the most righteous. And so it was that #RBG died as the sun was setting last night marking the beginning of RoshHashanah.” Innumerable people have benefitted from Ginsburg’s intelligence, foresight, and virtuosity. We will forever strive to honor, commemorate, and emulate her exemplary ways. May God grant comfort to her family and the many who mourn her tragic loss. 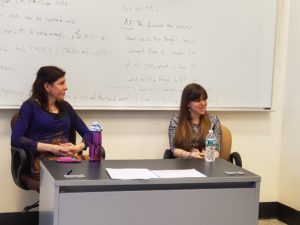 This past Tuesday, I had the opportunity to participate in an allied healthcare professionals panel at Lander College for Women. The panel was created by Sarri Singer, Director of Office of Career Services and Dahlia Bellows, Assistant Director of Career Services. I spoke alongside Laurie Lasher Scherzer, a pediatric occupational therapist. We each provided a general introduction about our respective fields followed by a Q and A style session.

The purpose of the panel was to share information with the students about physical therapy and occupational therapy. Many of the undergraduate students present are in the process of selecting a major and thinking ahead towards graduate school. This is a crucial junction that I recall being extremely stressful for me years ago. Having as much information as possible will hopefully enable the students to proceed forward in an intelligent and appropriate fashion, which is why I was excited to participate in the conversation.

Topics addressed included why we decided to pursue our chosen careers, how to pursue an internship, pre-requisites required for graduate school, information about graduate schools, and job opportunities that exist for the two professions. I shared my passion for physical therapy, especially pelvic floor physical therapy. I also described the challenges I faced as an undergraduate student who felt lost and confused for most of my college career. I told them that my stress levels would rise anytime someone would ask me the very typical question, “What major and career will you pursue?” The truth was that I envisioned myself enjoying many different medical care professions, therefore I found it difficult to commit to one. Which one would I enjoy the most? Which would be most appropriate for me? These questions bothered me for years. Fortunately, after many conversations with people older and wiser, I decided that physical therapy seemed like a logical fit for me. (Little did I know just how perfect it was, and I am so grateful to have found my calling!)

I encouraged those in attendance to take as much time as they needed to explore all potential options, to shadow professionals in their potential future careers (even if for only a day), and to interview people in the various professions they are entertaining to gather as much information as possible.  My final point was one of encouragement to the students- while it might seem that many others seem to have their career path figured out whereas they may be confused about the next step to take, there is still hope that they will find their passion and clarity.

Paying it forward is always a gratifying and meaningful experience. Personally, I am extremely grateful to the mentors and role models who shared valuable information with me and answered my many questions along my journey to becoming a pelvic floor physical therapist. I hope I was able to help the students at Touro College for Women along their unique paths.