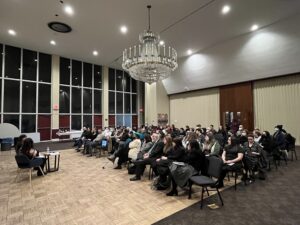 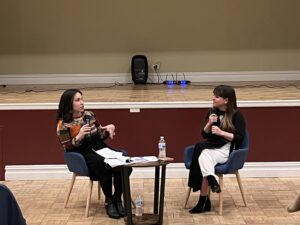 (The following piece was contributed by journalist Nati Burnside who attended the book launch of The Inside Story.)

She was inspired to learn about the topic after a friend of hers had a traumatic injury while giving birth. Until that point, Preil had basically been told that the pelvic floor was a specialty that required additional coursework. Her friend’s injury sparked her to find out more about the field and change her career path.

Pelvic floor dysfunction is any circumstance in which the muscles at the bottom of a person’s core are either too tight or too loose. Those conditions can lead to bowel, bladder, or sexual issues.

“I think that, growing up as an orthodox Jew, I knew that there were certain topics that we just don’t talk about for tznius reasons,” Preil said at her book launch. “I completely understand and respect that and I think there’s tremendous value to that.”

However, Preil has discovered over the years that this isn’t really a Jewish issue. She’s found that one of the reasons that her specialty is so hard to come by is because these issues are taboo for almost everyone. Those who do tell someone, usually tell their doctors. Unfortunately, not all doctors can diagnose these issues correctly because they wouldn’t be found on any of the usual scans and pelvic floor therapy isn’t exactly the most widely known specialty.

The main goal of The Inside Story seems to be awareness. Preil wants people to be able to recognize pelvic floor issues so that they know when they need to ask for help. Recent studies have found that one third of women will suffer from a pelvic floor disorder at some point. Yet Preil estimates that for every person who walks through her office doors, there will be ten more who don’t.

Preil is looking to de-stigmatize an issue she feels is too common to be kept in the shadows. “I just felt such a strong calling and need to share this information with people so they can get help in a dignified and timely manner,” Preil said to applause from the crowd of 75+ that gathered on a recent Saturday night to hear her speak at Mount Sinai Jewish Center (MSJC) in Washington Heights.

The event featured Preil being interviewed by MSJC’s own Rebbetzin and Yoetzet Halacha Racheli Taubes, followed by questions from the crowd. The forum featured an open atmosphere for discussion and even included a substantial attendance by men (about 1/3 of the crowd).

While men are less likely to need pelvic floor therapy, Preil encourages them to read her book in order to gain a better understanding of the topic both for themselves and in order to support their partners. The days of referring to the specialty as “women’s health” are gone and men might even need a pelvic floor therapist’s help one day.

The book is specifically targeted to Jewish women and Preil made sure that sensitive topics were dealt with in appropriate ways. There are many pictures in the book of stretches and exercises for people to do in order to combat different issues that they might have or to prevent issues from arising in the first place. Preil used herself as the model and made sure the pictures were as tznius as possible for the comfort of her readership.

Preil believes that The Inside Story should be part of the “kallah canon” for all women heading down the aisle. In fact, she’s offering a copy to any kallah teacher who wants one in order to raise awareness about the issues contained in her book.

“Riva Preil opens a conversation, friendly and empathetic, instructive and informative, in which she highlights the tools of her craft which can give women confidence  and comfort in many parshiyot of life,” said Rabbi Yaakov Neuberger, rabbi of Congregation Beth Abraham in Bergenfield and a Rosh Yeshiva at Yeshiva University, and Rebbetzin Peshi Neuberger, formerly a kallah teacher for 25 years and current teacher at Manhattan High School for Girls, in a statement endorsing The Inside Story. “Her engaging balance of modesty and clarity will make this volume invaluable for kallah teachers who wish to replace fear and insecurity with joyful anticipation, as they prepare young brides for robust and fulfilling marriages.”

Following the stereotypical lifecycle of the orthodox Jewish woman, the book moves along the timeline of a woman’s life. The first chapter (Pelvic Floor 101) focuses on the basic concepts of pelvic floor therapy as Preil realizes that many people reading the book are not aware of the subject matter, but also aren’t professional medical personnel.

From there, she discusses the life of a recently married woman and potential issues that can arise with beginning physical intimacy. Next up are postpartum complications, one of the most likely culprits for needing to see a pelvic floor therapist. As Preil points out, some countries automatically refer women to a pelvic floor therapist after giving birth. She recommends that every woman make at least one appointment to assess their status after having a baby.

Speaking of babies, the next chapter discusses pediatric issues such as toilet training from a pelvic floor perspective to allow parents to understand the issues better from that standpoint. The book then closes with a section about the possible pelvic floor changes and concerns that may arise for women during menopause and later in life.

All in all, The Inside Story is a concise and informative guide to a subject on which the majority of people could benefit from increased knowledge. Preil makes the material accessible to the masses and allows the reader to feel comfortable as the author discusses topics that many would shy away from discussing in public.

The book is available on Amazon and the Yeshiva University Seforim Sale. Feel free to contact the author at riva@revitalizephysicaltherapy.com. 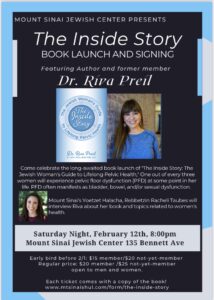 Come one, come all to the long awaited book launch party of The Inside Story: The Jewish Woman’s Guide to Lifelong Pelvic Health! On February 12, 2022, we will have the opportunity to celebrate my five+ years of work together at Mt. Sinai Jewish Center (MSJC). (Nope, not February 13, 2022 as originally planned because, who are we kidding, there is no competing with the Super Bowl. I wouldn’t miss one of my favorite annual events even for my own book launch!)

One out of every three women will experience pelvic floor dysfunction (PFD) at some point in her life. PFD often manifests as bladder, bowel, and or sexual dysfunction. How does one know if they are experiencing PFD during the various stages of their life, and what can be done to help address it? The Inside Story is a book designed to help ease life cycle transitions for Jewish women. It addresses the various pelvic health issues that may arise during the life cycle and provides practical exercises and guidance to help address it. The goal of the book is to share information about pelvic floor dysfunction and women’s health so that those suffering in silence can seek out appropriate treatment.

The program will include a conversation about the book and women’s health between me and Racheli Taubes, Rebbetzin and Yoetzet Halacha of MSJC. Event attendees will receive a copy of the book while enjoying fine wine and scrumptious cheese. Both women and men are invited and encouraged to attend.

The most exciting part about launching this book is that it gives me the opportunity to help an even larger audience. True, I am blessed to love my job tremendously, which includes one on one opportunities to educate my patients. However, too many women don’t even realize that physical therapy can be an invaluable modality to address their symptoms. I hope and pray that this book will help me educate MANY more women, and that it will be included in what I like to call the “Kallah Canon,” the list of books that Kallah teachers encourage their brides to read in preparation for marriage.

To quote Rabbi Yaakov And Rebbetzin Peshi Neuburger (Rav of Congregation Beth Abraham/Rosh Yeshiva at Yeshiva University and Rebbetzin of Congregation Beth Abraham/Educator at Manhattan High School for Girls), “In these pages Riva Preil opens a conversation, friendly and empathetic, instructive and informative, in which she highlights the tools of her craft which can give women confidence  and comfort in many parshiyot of life. Her engaging balance of modesty and clarity will make this volume  invaluable for kallah teachers who wish to replace fear and insecurity with joyful anticipation, as they prepare young brides for robust and fulfilling marriages.”

May God enable me to help as many women as possible on both the micro (day to day with my patients) and macro (The Inside Story) levels!