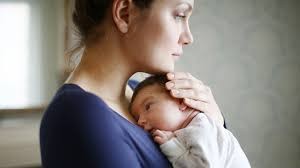 All pregnant women look forward to that first precious moment when they can finally hold their newborn in their arms. That instant connection and the tremendous love felt for such a tiny little human is one they never could have imagined. But how does the story take such a different turn for approximately 10% of women who develop postpartum depression (PPD)? Why is it that shortly after delivery, so many women experience such profound depression and negative emotions towards their newborn?

One of the most challenging aspects of PPD is that many women feel guilty about their feelings. One the one hand, they just had a baby and should feel ecstatic, right? So when the answer is “Um…actually…no. Quite the contrary,” women may feel ashamed to admit this to their doctors. Which means that the current statistic stating that 10% of women experience PPD is likely a gross underestimation.

Treatment of PPD is of the utmost importance, for both the mother and infant’s wellbeing. Research has shown that infants of mothers with PPD exhibit higher cortisol (stress hormone) levels, increased sleep difficulty, and increased crying. These infants grow into children who demonstrate slower growth, decreased cognitive abilities, and greater risk of developmental delays compared to their peers whose mothers did not demonstrate PPD.

Laura Beil wrote an excellent article in Science News[i] which explains the hormonal and neurological pieces of the PPD puzzle. When women are pregnant, they experience an upsurge of the hormones progesterone and estrogen. These hormone levels drop significantly and suddenly after delivery. This abrupt halt in the body’s hormone production may result in a whiplash effect that results in the depression and/or anxiety associated with PPD.

Researchers have studied certain areas of the brain, including the amygdala, hippocampus, and nucleus accubens, and they compared these areas between women who demonstrate PPD to those who do not. A Functional MRI study revealed that both mothers with and without PPD demonstrated elevated amygdala activity, decreased stress, and more positive emotions when they were shown pictures of their own infants. However, mothers experiencing PPD showed a similar response to other infants, indicating a “desensitization” of sorts to their own infant which may make it difficult for them to bond in a unique way with their own child[ii].

Furthermore, one study has shown an inverse correlation between third trimester oxytocin levels with PPD (higher levels of oxytocin were associated with lower risks of PPD). The proposed explanation for this is that oxytocin, which peaks during delivery, is a hormone that contributes to maternal-fetal bonding. Lower levels of oxytocin or impaired hormone receptors may interfere with the bonding of mother with new baby as well as contribute to depression.

Maguire and Mody of Tufts University[iii] have previously proven that during pregnancy, the hippocampus has fewer neurosteroid receptors compared to non-pregnant women. This is to protect the brain from the increased amounts of progesterone and estrogen during pregnancy. Fewer receptors means that the elevated hormone levels won’t pack as big of a punch as they otherwise would have.  Typically, after delivery, the number of receptors rises once again to allow the now normal amounts of progesterone and estrogen to do their jobs as per usual.

Based on this, Maguire decided to perform a fascinating experiment to further explore the hormone-brain-mood connection. Maguire genetically modified certain mice to lack these neurosteroid receptors. This resulted in decreased maternal-fetal bonding and levels of care. However, when these same mice were administered a progesterone based neurosteroid to mimic the levels of progesterone present during pregnancy, the mice suddenly tended to their offspring and bonded with them.

This begs the obvious question- can similar hormone therapy help alleviate PPD? Would providing supplemental amounts of progesterone obviate the intense postpartum hormone changes to the point that it can eliminate PPD? Maguire has been seeking answers to these questions, particularly by studying brexanolone, a progesterone based neurosteroid. In a randomized controlled trial, women who were given brexanolone demonstrated on average a 21- point reduction on one depression scale compared to 9- point reduction for women given a placebo. Sage Therapeutics, the pharmaceutical company developing the drug, will be seeking U.S. Food and Drug Administration approval soon. These preliminary findings are extremely promising, and it will hopefully lead to improved treatment of PPD thereby improving maternal-fetal relationships.