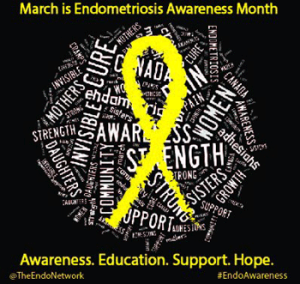 In honor of Endometriosis Awareness Month, I have decided to discuss and share an incredible TEDx talk given by Shannon Cohn at the University of Mississippi, entitled “The Most Common Disease You’ve Never Heard Of” (link to video). First, I will provide a bit of background information.

Endometrosis is a condition in which endometrium, tissue that typically grows inside of the uterus, grows outside of the uterus.  Endometrial tissue can grow on the ovaries, fallopian tubes, and surrounding tissue. The main symptoms are pelvic pain (especially during menstruation) and infertility.  Other symptoms may include nausea, bloating, fatigue, migraines, organ dysfunction, internal bleeding and/or scarring.  On average, the disease takes ten years to diagnose over the course of seeing eight different doctors.  It effects 10% of reproductive aged girls and women.

In her talk, Cohn discusses how endometriosis is arguably the most common devastating problem that most people have never heard of.  She herself describes her personal struggle with years of menstrual pain, so much so to the point that at times she could barely stand straight during her period.  Thirteen years and seventeen doctors later, she finally received an accurate diagnosis and heard the word “endometriosis” for the first time.

Once properly diagnosed, Cohn underwent an extensive surgery that required a week long hospitalization stay.  She explains that there are two types of endometriosis surgeries, excision surgery (during which the endometrial growths are removed) and ablation surgery (during which growths are burned at the surface, a less effective procedure than excision).  Many women with endometriosis require multiple surgeries over the course of their lives.

Cohn discusses that the medications described for women with endometriosis (ex. anti-inflammatories, birth control, or hormone drugs) are merely band aids that treat symptoms as opposed to cures.  In addition, they can cause a wide variety of unpleasant side effects.

Cohn’s explores an obvious question- if endometriosis plagues so many women, why isn’t there better treatment available?  Cohn posits that it is likely due to a number of factors, including lack of awareness (both within the medical and lay communities), gender bias, fragmented care, what she refers to as “the perfect awful storm.”  The fact that menstruation is a taboo further complicates proper diagnosis and treatment.  Sure, no one wants to discuss their menstrual cramps, at times even with physicians, however debilitating painful cramps may be indicative of a condition that requires attention.  Cohn encourages women to discuss the topic with appropriate personnel to raise awareness and enable those who are suffering in silence to obtain the help they deserve.  Her message has inspired me to write this blog and to share her TEDx talk.  I encourage you to continue the conversation and promote further awareness.