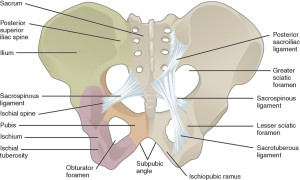 Blog after blog, we discuss the pelvic floor and the musculoskeletal system contained within this region of the body. In case any of you have wondered, “Hmm…what exactly does she mean when she talks about the pelvic floor?…” today is your lucky day!  Because today, dear reader, we will discuss some of basic anatomy and physiology of the area we refer to as the pelvic floor.

The pelvic floor is a truly incredible system.  Several noteworthy anatomical landmarks include:

Four layers of muscular tissue (aka diaphragms) exist within the pelvic floor: 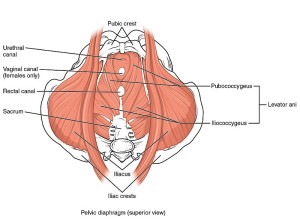 The area located between the vagina and the anus is referred to the perineal body.

Hopefully, this little anatomy lesson has given you a better frame of reference for any discussion about women’s health. Understanding one’s body and how it functions will hopefully lead to a greater appreciation of the daily miracles that occur as well as lead to quicker diagnosis and treatment of dysfunction.